St. Nicholas Priory took part in the nationwide ‘Santa Dash’ on Friday 11th December as part of the National School Games, aiming to promote a healthy lifestyle and the joy of being physically active. Some of the children and staff wore Santa hats and had a lovely time ‘dashing’ around the playgrounds 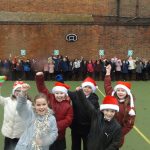 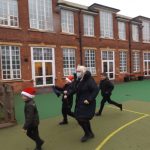 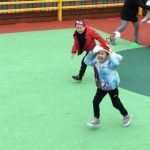 In September 2019, the school introduced a gymnastics club as the school recognised that we have many talented gymnasts and the local clubs are over-subscribed. This has proved to be highly popular and the children are learning lots of new skills. 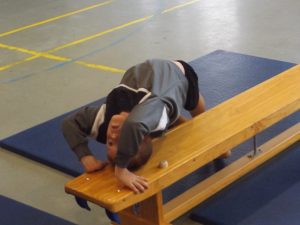 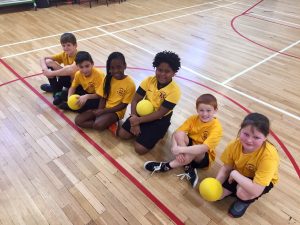 Today we saw another win for St Nicholas Priory. Y4 came in joint 1st place with GYPA & North Denes with 10 points each.

The behaviour and team support from all six children was fantastic, well done team!

Charlie Talman received the Sports star award this week from Jake Sharp @Premiersport for her ability and attitude in football training. 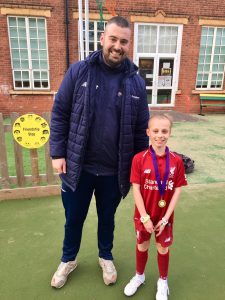 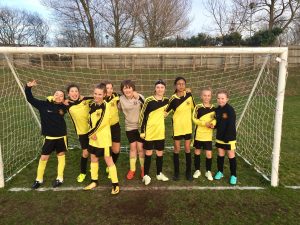 Girls football through to semi finals

Another win for these girls on Tuesday 5th March, taking them into the Semi finals.  The score was 5-0 with a powerful performance from all involved!
The team continues to grow in strength each week.

Another successful sporting morning for KS1. Twelve KS1 children gave it their all to complete a cross country course at North Denes.  With no school field and limited facilities at Priory to train on these children set their pace and ran like Forest Gump! Clausir set a school record with a running time of 2 minutes 14 seconds.

Miss Howes is very proud of every child’s effort. 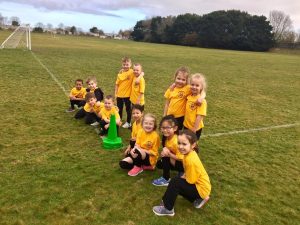 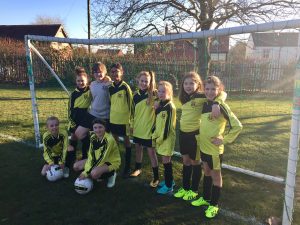 The team scored a strong 6 goals between them.

The overall performance from the team was solid, starting with the goalkeeper, through the defence and into the strikers. The team played with respect and ambition throughout the duration of the game. Supporting one another on and off the pitch.

We look forward to playing the quarter final match against Hopton Primary.

A BIG well done to the Y3 dodgeball players who competed in a GY7 dodgeball competition on Friday 15th February.  The team of 6 came in 1st place by working together as a team. Using tactical play to dodge, catch and throw the balls to defeat their opponents. 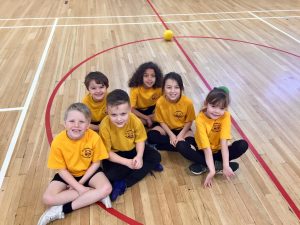 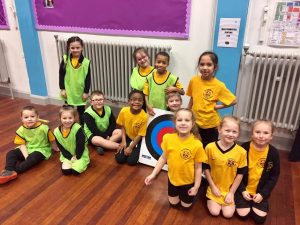 On Monday 4th February 12 KS1 pupils competed in a Premier Sport archery morning. Both teams successfully made it to the semi finals! All children promoted a positive attitude with determination to hit the target.

Well done to everyone, Miss Howes was super impressed with all the efforts.

On the 5th December 14 Year 5 and 6 pupils represented St Nicholas Priory at the East Norfolk Schools Sports Partnership Cross Country race at Bure Park. Children competed against other schools in the local area and all did brilliantly in what was a wet and muddy race. They all had a fantastic attitude and staff couldn’t have been prouder. A special mention goes to Emmie Talman who finished 4th, qualifying for the County finals at Holkham Hall next year. 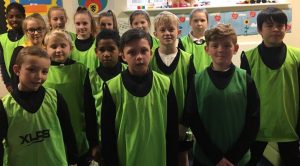 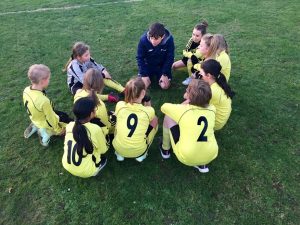 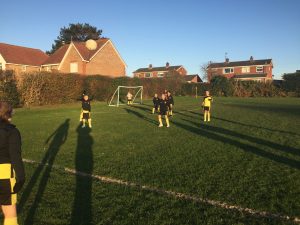 Unfortunately, the score was 5-1 to Ormesby Village School. Despite the score, all players left the ground in high spirits with determination to train harder. As a team, their game play was well thought out. The girls were able to create space, tackle and take successful throw ins.  Opportunities to score were missed due to hesitation but Iris was able to score a cracking goal in the first half.

Miss Howes – “I am proud of the girls for showing resilience in a new environment, taking each aspect of the game as a learning curve. I am also extremely proud of how they conducted themselves as a team, encouraging one another on and off the pitch!”

Tom – “There is so much potential in this team but as a whole team it is a foundation to move forward on. To be that receptive and understanding is fantastic to bring training into match play seamlessly is even better. I can’t wait for the next game”.

Iris – “My Dad was so happy I scored, he lifted me up and took photos of me in my football kit”

Wiktoria – “I loved today’s game; I am looking forward to next week. I am covered in mud from where I was tackling everyone!”

Klaudia – “My mum didn’t want me to play football but I told her I was! We are a proper team. I was so glad when I stopped the ball going past me. I tackled so many girls. Kicking the ball down the pitch was one of the best things to do”

The girls have decided that rather than taking only 7 players to each match they want all girls interested in football to participate. This means we will use rotations of positions during both halves of the games rather than playing the same 7 girls each week. We have decided that as a school this is the best approach to inclusive practise however, the girls appreciate and respect that this will give less consistently in player performance.

We are growing as a sporting school, encouraging girls to take pride in their play. Coaching is being delivered by Tom at Premier Sport alongside Miss Howes and each week to girls show significant amounts of dedication, determination and resilience. This year we have joined the U11 North football league.
Unfortunately as a school we are limited for grass access until October half term when we will be having AstroTurf laid. For the time being we are using local playing environments to improve their abilities. 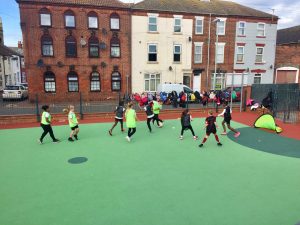 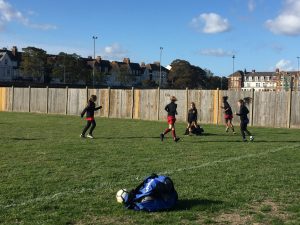 Ellie “I enjoyed playing matches on the grass because the ball was moving quicker.”
Amelia “I felt safer on the grass. It was soft when Wiktoria Slide tackled me! She did it to everyone.”
Denny “When can we play again? My Dad said he would come watch me. I am scoring goals and want him to see me.”
Meliya “The grass is so much better than the playground.”
Holly “You should of seen JayAnns goals, she got two in a row, they were amazing.” 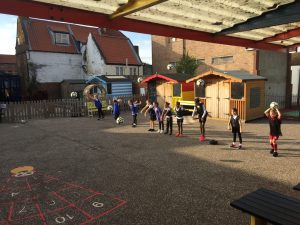 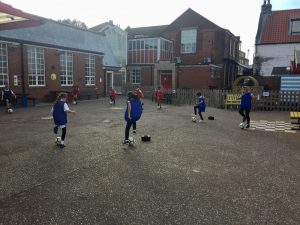 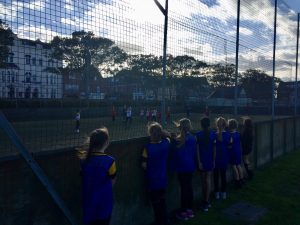 St Nicholas Priory is ready for their second year of netball! The girls have took responsibility and shown ambition by training at break time, lunch time and after school.
We welcome new faces to the team and old faces to training sessions to support their girls and continue to family ethos we created last year. 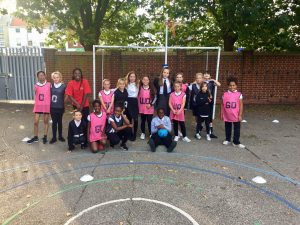 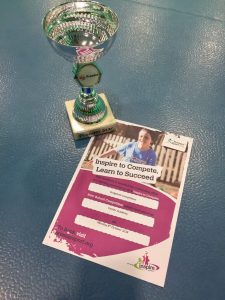 KS1 have had a fantastic start to the sporting school year, winning 1st place in the Premier Sport dodge ball morning at Caister Academy on Monday 8th October.
Miss Howes and the school are very proud of both teams. 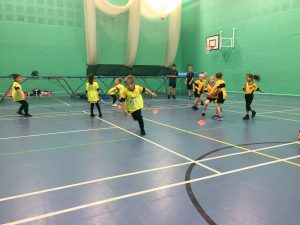 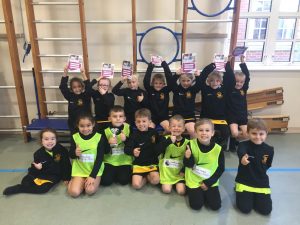 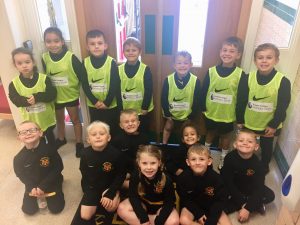 A huge well done to all of the children and staff. 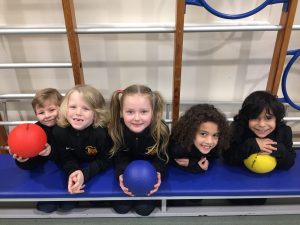 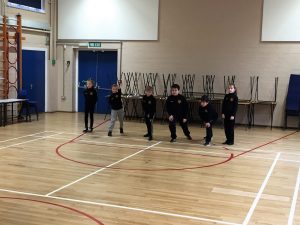 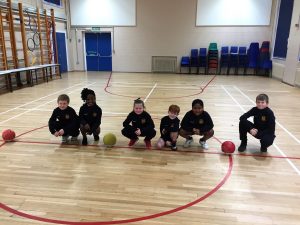 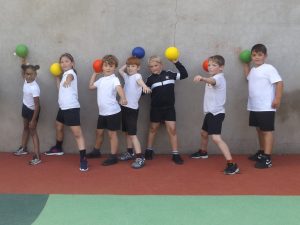